KiSS is the abbreviation for : Kopfgelenk Induziert Symetry Störungen which can result in
“Symmetry disorders induced by the cervical vertebrae”

KiDD is the abbreviation for : Kopgewrichten Invloed bij Dyspraxia to Dysgnosia which can result in
“Dyspraxia/dysgnosia induced by the joints of the cranio-cervical junction”

“KiSS or KiDD Kinder” are children who show symmetry disorders induced by the joints of the cranio-cervical junction.

Unknown syndrome in France that leaves many parents alone to cope with their child’s disorders.

Doctor in manual therapy and surgeon in Cologne. Dr. Heiner BIEDERMANN was Chief Medical Officer at the Surgical Clinic of the University of Witten / Herdecke. In 1988, he opened an orthopedic practice. Founding member and professor of EWMM (European Working Group for Manual Medicine).

In over 25 years, he has treated more than 30,000 infants and children on the basis of manual medicine. Author of many books and publications that focus on the manual therapy for children, he is considered to be the discoverer of “KiSS syndrome”

Here our meeting with Dr. Heiner BIEDERMANN and his team in Cologne

“Originally, these children were referred to us for their fixed and contracted attitude, the consequences of this attitude will be recognized later, once the – cause and effect relationship – has been established. We have thus established as a common denominator to these symptoms, the articular complex of the cranio-cervical junction..”

“As soon as the child is born, it is recommended to massage his neck with a mixture of oil and wine, it is necessary to start with the side towards which the neck is bent to finish on the other side; then try to move the child’s head without forcing. “

“Nature did a perfect job. If one restores a body perfectly by rebalancing its structures, only food and rest are necessary to help nature to do the rest. “

Disruption of symmetry, induced by the articular complex of the cranio-cervical junction, results in a loss of mobility of the joint between the first cervical vertebra and the base of the skull.

Today the importance of good mobility of this joint is still too often forgotten or underestimated.

Wrongly considered as a Congenital Muscle Torticollis (TMC), it is important to understand the difference.

A bit of anatomy:

The cervical spine is composed of seven vertebrae, it is located between: ·

Classically, the cervical spine is divided into two parts: ·

For a better understanding, see the video on the right →

In the context of the KiSS – KiDD syndrome, we focus on the upper cervical spine.

This means that an adult with skull base dysfunction must be approached with great respect. The osteopath can not restore in 10 minutes what Nature has taken years to compensate.

The Atlas is connected to the occiput and Axis by different anatomical elements: ·

Each of these elements ensures the maintenance and stability of the joint.

In the context of a KiSS syndrome, the origins of the functional lesion can be multiple:

As a result, the mobility of the cranio-cervical junction is hampered.

The loss of mobility can lead to local and secondary functional adaptations that can be:

In other words, KiSS-KiDD children suffer from a loss of mobility of the joint between the base of the skull and the first Atlas cervical vertebra.

Their bodies will adapt to this loss of mobility.

From 0 to 2 years, we discern the KiSS type I or II whose symptoms are listed in the following lists :

Children with KiSS syndrome can be 100% Type I or Type II,
However, some of them have an association of symptoms of KiSS type I and II, so they are KiSS type I.II.

From 2 years old, we talk about KiDD Kinder.

KiDD refers to dysgnosia (disturbance of perception) and / or dyspraxia (clumsiness) induced by the joints of the cranio-cervical junction.
KiDD Kinder, are former KiSS Kinder that have not been detected earlier.
The symptoms are listed in the following list:

Most of the time, not all symptoms are present.
When caring for KiDD children, it is important that children have been seen by a doctor to rule out any other diagnostic path that would require medical attention.

Klippel-Feil syndrome (SKF) is characterized by a lack of segmentation of the cervical somites, resulting in congenital fusion of the vertebrae, visible radiologically. Prevalence is estimated at 1 in 50,000. It is often associated with the classic clinical triad including a low posterior hair implantation, a short neck, and a limited range of neck movement. 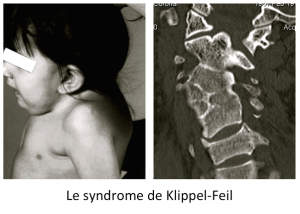 The Congenital Torticollis (TC) is defined by a head attitude that from birth tilts laterally in one direction, while the chin is facing the opposite side. This disorder is always associated with other medical conditions such as bone defects and/or neurological disorders[6]

Congenital Muscle Torticollis (CMT) differs from Congenital Torticollis by a progressive appearance of symptoms in the first weeks of life whose clinical characteristic is the presence of persistent swelling (olive) in the Sterno-Cleido-Occipito-Mastoidian muscle (SCOM) and the absence of an associated medical condition.

Sandifer (SS) syndrome is defined as a paroxysmal dystonia* type movement disorder occurring in association with gastroesophageal reflux disease, and/or the presence of a hiatal hernia.

The Congenital Asymmetric Pelvis (BCA) is described by Seringe, Bonnet and Langlais, in the article The congenital asymmetric basin: clinical, radiological and evolution study [11] as the basin equivalent of a torticollis at the neck. This means that the child has an asymmetric posture of the lower limbs. One of the lower limbs cannot be moved closer to the centre line. There is a muscle retraction of the homolateral hip abductors at the leg, a retraction of the contralateral hip adductors at the leg.

Congenital dislocation of the hip

Hip dislocation (LCH) has been known since ancient times. It was a common condition that was unevenly distributed among the world’s population. It affects the female population more frequently, certain conditions of life before and after birth favour the development of CHL.

It is common to say that LCHs are more frequent in the Brittany, Creuse and Eastern regions.

If we summarize these symptomatologies, it follows that posture disorders in infants can have as their origins:

However, it is never mentioned that the child can simply have a dysfunction of the articular mobility of a vertebral stage.

It is possible and it is what we call KiSS syndrome.

In fact, KiSS is a blockage of the cranio-cervical junction, i. e. the first joint between the base of the skull and the first cervical vertebra.

This joint dysfunction results in a postural adaptation of the whole body.

In keeping with the osteopathic concept, Sutherland used the following metaphor when referring to an Anglo-Saxon saying:” As the twig is bent, so is the tree inclined ” which could be translated as : ” As the young shoot is curved, the tree bends “[2]. We then understand the interest of early osteopathic management of these children.

In this case, the head is rotated right and tilted left.  Ligaments and muscles in the suboccipital region are under stress, resulting in muscle spasm.

The cranio-cervical junction is impacted.

When the skull is dysfunctional, the centre of gravity is changed. There will be negative effects on the neurological and vascular structures of the base of the skull and neck. In particular, structures near the musculature will be under stress.

The vertebral arteries and first cervical nerves protrude from the posterior part of the occipito-atlantoid ligament. It is very likely that this ligament and others cause irritation of the neuromuscular system in KiSS syndrome.

Through the inclination of the skull, and the tensions of the muscles of the cervical spine, the pelvis will be positioned on one side to compensate for the imbalance of the body.

The pelvis pulling on one side of the spine will tilt the spine, causing a contraction of the back muscles on one side, and creating the opisthotonos.

False hip subluxation may be the result.

The corrective technique of KiSS syndrome leads to a normalization of C0/C1 subluxation. This also harmonizes the adaptive phenomena seen above. 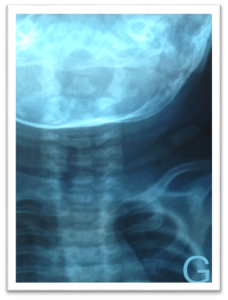